Today, the medias scare us about other people and humans tend more and more to be afraid of the unknown...

I hosted some people from France or other countries thanks to Couchsurfing (CS) and it was a great experience each time. They told me lot of stories and they gave me the wish to do something unusual too!

I wanted to check myself if it was possible to travel and meet people who want to share, discover and learn...

Why the North of Europe? because since I was a child, I've been wanting to go there and admire the landscape, the viking's history, Legoland, Fjord, churches, etc... I traveled by train with InterRail and slept in quite a few different places, from CS hosts' houses to hostels, without forgetting the occasonial stay at some friend's place.

I started in Paris (France) on the 13th of July 2014 and finished in Helsinki (Finland) on the 17th of august 2014. I purchased an InterRail 1 month pass which allowed me to take any train without paying more. I went to a lot of railway stations and took many different kinds of trains! I spent 1 to 3 nights in each city, as I planned before the trip. You can see all the places I have been to on the sidebar ;) 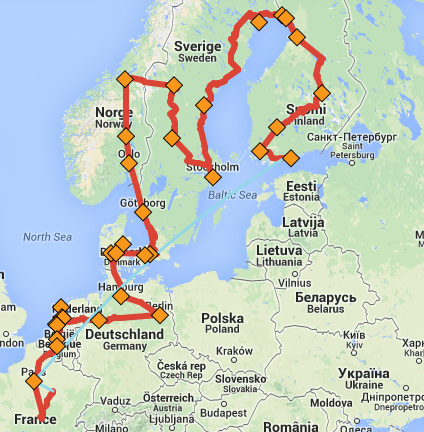 © 2014 - 2021 Designed by VicksThemes and modified by Julien Schermann